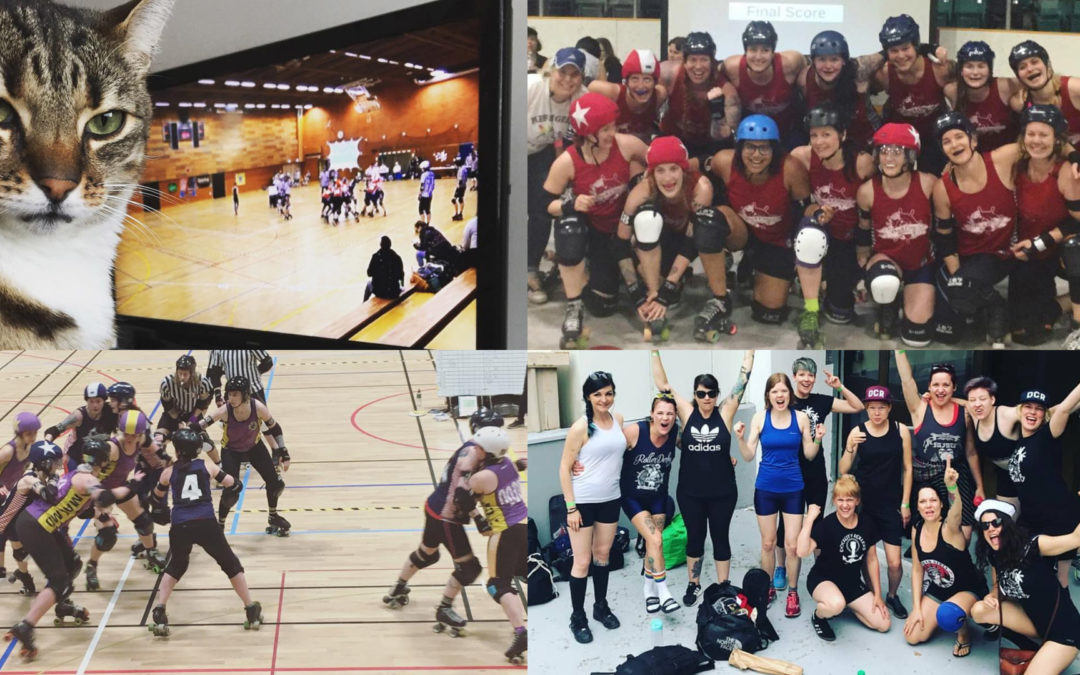 There´s been a whole lot of derby this season for all of Dock Citys three teams. We have had home games, away games and even went on a few tournaments. Here´s a recap of what we have been up to these past months.

This spring our Anchors have had one home game, one away game and two major tournaments outside of Sweden. In january of 2018 they were placed nr 65 in the WFTDA-rankings.
The 24th of february the A-team played a mock-sanctioned game against the Royal Army in Farstahallen in Stockholm. The Royal Army put up a good fight, but our Anchors took home the winning with an official score of 168-273.
In april Dock City Rollers organized a double header in which the A-team played against Crime City Rollers B. It was an even game right up until the very last minute, where Dock CIty managed to get lead jammer in the very last jam, collecting the points to save the score at 156-151 for our Anchors.
With these games behind, Dock Citys Anchors were moved down one place, coming into their two big tournaments at place 66 on the WFTDA-rankings.
Next up they packed their bags heading west, to the Put up your Toques-tournament in Ontario, Canada in may. Sadly there was very bad timing weather-wise, and a storm caused the venue to blackout and their first game in the game was cancelled after playing only a few jams. Day two had better luck in store, Dock City played against Royal City and won, 204-186. They continued their streak by winning 92-279 against Winnipeg.
The second tournament of the season was a bit closer to home, Euroclash in Newcastle, UK, only two weeks after the last one. Our Anchors played their first game against Dublin, which they won with the score 199-222. They continued to excel, playing fine derby both against Auld Reekie and the Blitz Dames, going away from both games with a win. The score against Auld Reekie finished 237-195, and the game against the Blitz Dames finished 248-135.
With the games played our Anchors have fought their way up to place 51 on the WFTDA-rankings as of the 31st of may. Well deserved!

Moving on to our Plan B. They have been playing one away game and one big tournament. Before these games they were ranked 182 in Flattrackstats-ranking.
In may they travelled east to play against Norrköping B, a game in which they came out the winners, with the score of 131-182.
They proceeded to travel abroad for the Alerte á Malibout-tournament in Nice, France. There they played three games. The first one against Nîmes, which ended 373-61 in favor of Nîmes. Their second game was a bit closer, with their opponent being Auver´Niaks. It ended 114-206 to the Auver´Niaks. The last game of the tournament was played against the host, Nice and ended at 249-174 for the home team. They sure got the prize for being the happiest on the track, even when facing defeats though!
As of 18th of june they are placed at 200 according to Flattrackstats-ranking.

The C-gulls have also had an eventful spring. Since this is our newest team, they have been backed up with players from the other teams on occasion.
In january the C-gulls hosted a bout against Stitch City from Borås, winning the game with 225-211.
In may they played against The Royal Brigade. Some players had their very first bout, and they came out winning this one too, 264-204 was the official score.
In april the C-gulls hosted Wet City Rollers from Bergen, Norway, who did a great game even though they were a few players short. Our gulls ended up winning with the score being 318-135.